It is no secret that apps like Piano Tiles 2 can help you with your hand-eye coordination, and be a great way to pass the time. But there has been some argument, especially among those doing studies on the affects of music apps on the brain, as to whether or not playing musical games actually helps to develop musicianship or the musical ear.

The Role of Attention Span in Musical Training

Traditional piano lessons are far beyond the typical attention spans of most digital natives today. Digital natives have grown up in a world of immediate gratification and constant stimulus-response behavior in which actions prompt instant rewards.

Not only is this reinforced at home, but also in smartphone apps, video games, and even incentive based school activities. These include:

In the short term, these are effective ways to manage behavior and keep people (kids especially) occupied; however, in the long run, they can be detrimental to the attention span.

This brilliant and funny cartoon shows how a digital native (the girl having a piano lesson) is much more inclined to spend hours and hours putting together a presentation in a digital medium than she would be to put in the time to learn a real instrument such as the piano.

The look of indignation on the teacher’s face is certainly understandable, as she in not a digital native, and understands that technically, that PowerPoint presentation took WAY more time and attention away from the actual activity, that could have been accomplished in the same amount of time. 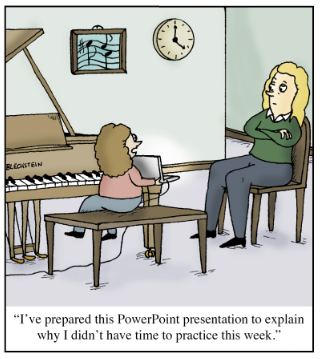 Willingness and Context in Relation to Motivation

There is no question that willingness plays a huge role in the ability to learn something new. That is why digital natives are much more likely to get excited about starting to learn piano on an App like Piano Tiles than on a cumbersome new instrument like an acoustic piano.

Some reasons for this are:

In other words, starting from an app can mean the difference between someone taking to the musical endeavor in the first place, or quickly losing interest in the first few weeks.

How Can Piano Apps Train Your Ear?

There are several ways in which playing a piano app can help you train your ear.

First of all, from the standpoint of rhythm, one can plainly see that as the tiles on a game like Piano Tiles run across the screen, you have to tap them in rhythm in order for them to recreate a song that is recognizable to you.

Secondly, from the tonal standpoint, you have to be able to hear the pitches that are coming out of the piano and associate them with the key you are pressing. Even though there is no guarantee of success in hitting the right note, it also trains you to avoid mistakes.

Thirdly, looking and thinking ahead is a hugely necessary skill in playing any musical instrument. The game of Piano Tiles really forces you to look and think ahead to avoid hitting the white tile as you are playing. If you stop listening with an engaged ear for even a second, you’re going to end up losing the game.

What’s the Next Step?

If taking traditional music lessons is not realistic from a financial or time perspective, you might want to consider starting with a music app on your tablet or smartphone. This can definitely tell you if you are willing to spend the time devoted to a musical endeavor that playing a real instrument will eventually take.